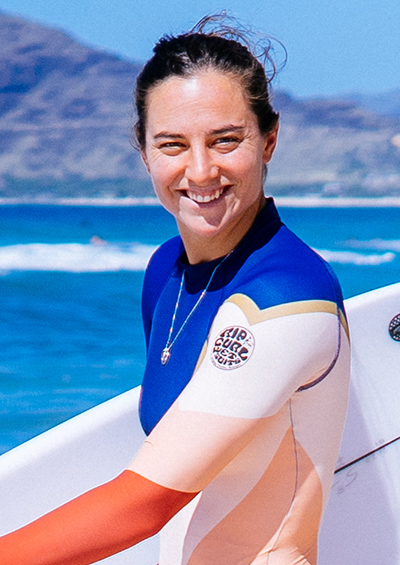 At just 25 years old, with two world titles to her name, Tyler Wright is the future of Australian women’s surfing. The pick of the crop, in a family that has produced two other World Tour surfers – in brothers Owen and Mikey -Tyler has been at the forefront of women’s surfing for over a decade now.

Tyler and her four siblings grew up travelling the east coast in a six-bed passenger van, driven by their father Rob - a passionate surfer and plumber by trade - competing in Australia’s junior surfing contests. This unique family dynamic has bred arguably the strongest surfing pedigree in the sport’s history.

At 14, Tyler famously became the youngest surfer in history to win a senior World Tour event, taking out the 2008 Layne Beachley Classic at Manly Beach, and setting a record many believe will never be broken.

She won a World Junior Championship in 2010 and qualified for the World Tour the following year, where she finished fourth on her way to taking out Rookie of the Year honours. In 2016 she broke through for her first world title, making it back-to-back championships in 2017, despite suffering a serious knee injury during the all-important European leg.

Raised on the reefs, beaches and point breaks around Culburra, on the NSW South Coast, Tyler possesses what many describe as the most potent power attack in women’s surfing, marked by her signature frontside power-hack.

Like her two brothers, she is also rated one of the best in the world once the waves get big. Tyler lists her favourite break as P-Pass – an intimidating though perfect Micronesian reef pass – where, in 2013, she landed a sought after magazine cover shot (one of the few awarded to a woman) for paddling into one of the heaviest barrels ever by a female.

After contracting an exotic strain of the influenza virus halfway through the 2018 season while competing in South Africa, Tyler was forced into an extended lay off that saw her miss the remainder of the year and all but one contest in 2019.

Her comeback onto the competition circuit was hugely successful with a second place at Maui, followed by taking out the Tweed Coast Pro in early September 2020, catapulting her back into the limelight.