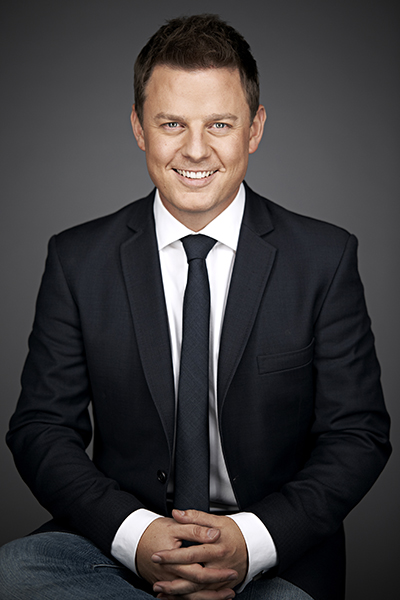 The switch to the breakfast program happened in June 2020 after Ben spent a decade as 2GB’s Drivetime host where he consistently topped the ratings.

Ben became the youngest reporter in history to win a Walkley-Raward double in the same year.  He won a Walkley – Australia’s top award in journalism – for his coverage of the 1997 Thredbo landslide tragedy and a Raward – the top accolade in the Australian radio industry – for excellence in journalism.

Ben started working in radio aged 15 as a work experience kid on the Alan Jones Breakfast show at 2UE where he immediately fell in love with broadcasting.  While completing his final years at high school, he worked weekends on the Continuous Call Team hosted by Ray Hadley.

He became a cadet reporter at 2UE in 1995 and then aged 20, was appointed as a political correspondent based at Parliament House, Canberra. It was during this stint where Ben formed an interest in politics and formed an extensive list of contacts.

In 1998 he spent a year at Sky News as a reporter and newsreader before being headhunted by Channel 9 a year later.  Since 1999 he’s worked on a range of programs at Nine including Today Show, A Current Affair, Nine News (political reporter), 60 Minutes and as host of top-rating Australian Ninja Warrior.

Away from his media engagements, Ben volunteers for several charities in the areas of fundraising, lobbying, strategy and as a Master of Ceremonies.

Ben is married to Seven Network journalist Jodie Speers and they have a son Freddy and two daughters, Pearl and Goldie.