LISA WILKINSON ON THE HEARTBREAKING DEATH OF HER MOTHER, HER FATHER’S LEGACY AND MARRIAGE TO HUSBAND PETER FITZSIMONS 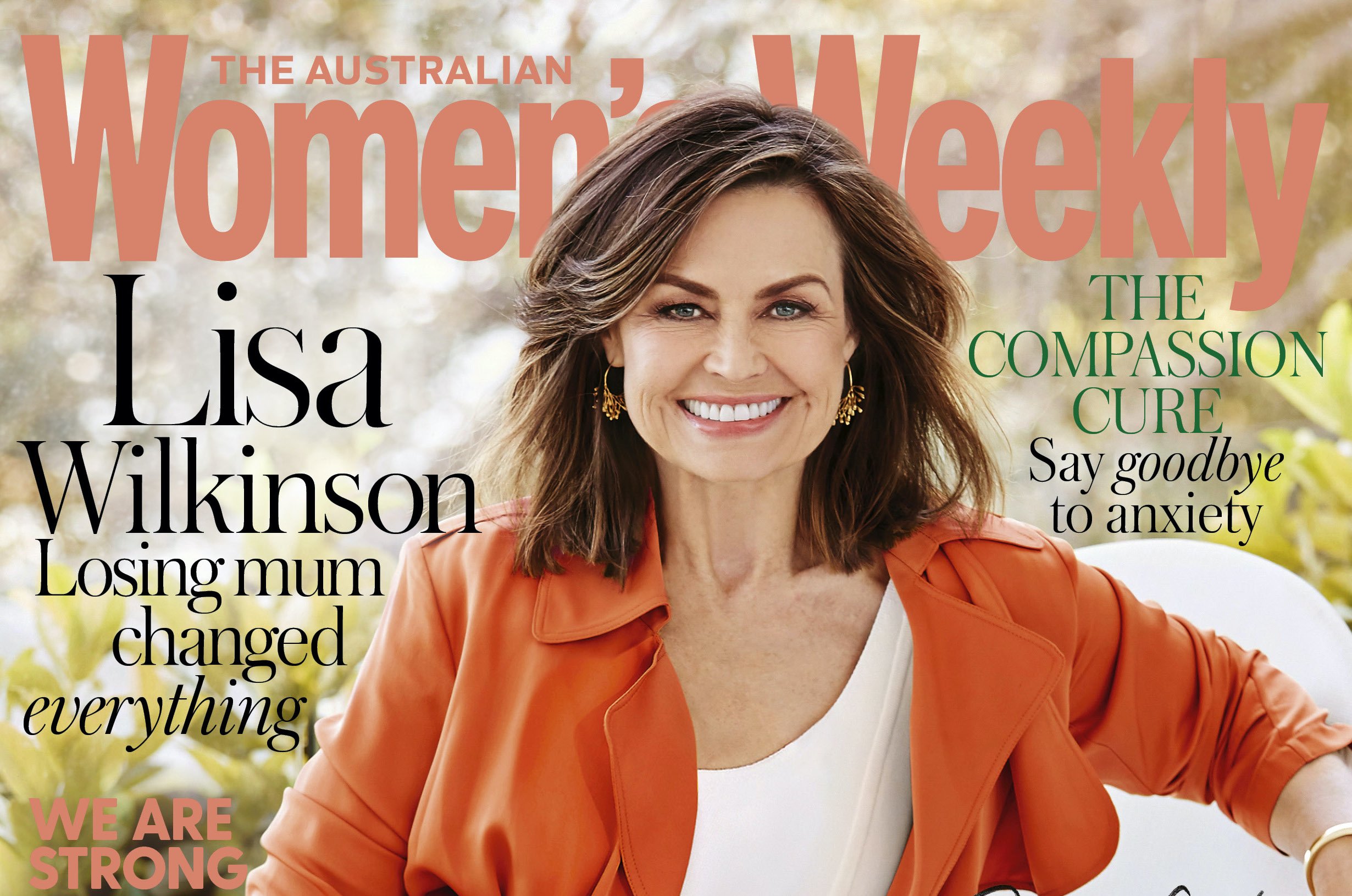 Pushing a shopping trolley down the sparsely stocked aisles in her local Woolworths, Lisa Wilkinson is stopped by a sudden thought.”I wonder if Mum needs anything,” she ponders, pulling out her mobile phone and preparing to make a quick call to find out.

It’s then – not for the first time, and certainly far from the last – that the crushing realisation her mother, Beryl, is no longer here hits her afresh.

At the age of 89, Beryl lost her battle with cancer close to two years ago. Yet, The Project host admits with raw honesty, “I’m still not used to her not being around.”

As she speaks to The Australian Women’s Weekly today, that sense of missing her mother is especially keen. For Lisa, now 60, has recently delved deep into her past, filming an episode of Who Do You Think You Are? for SBS, and the litany of tragedies she found there broke her heart.

She discovered a long line of ancestors on her mother’s side who had struggled with unimaginable poverty, abuse and institutionalisation. Generation after generation had been dealt the harshest of blows and while some had come out the other side, others had not.

It was a journey that saw Lisa shed many more tears than she was prepared for. But it led her to more keenly appreciate the incredible resilience Beryl possessed, despite her traumatic start in life.

“And my greatest sadness,” she says now, her voice catching, “is that I can’t share this with my mother. She passed away having so many huge question marks still hanging about who she was, what her background was, what led to her difficult childhood.”

Born to a single mother at a time when the stigma of being fatherless was overwhelming, Beryl was not only illegitimate, she was completely in the dark about who her father was.

It would not be until she was 50 that she learnt his name, another decade or so more before she learnt that he’d actually died of tuberculosis at the tender age of 21, shortly after she was conceived. He left no surviving family members, nobody to step up and help Beryl’s mother Marie.

And help she desperately needed. Marie struggled with parenthood, with the shame of being an unwed mother. To cope, she turned increasingly to the bottle, repeatedly placing her young daughter into care when finances were straightened.

“My mother grew up with the stigma of not only being out of orphanages but also being considered a ‘bastard child’. And the coping mechanism that my grandmother employed probably didn’t help her parenting skills,” Lisa says.

“Mum had three half-brothers to two different men but those marriages never lasted – those men were not kind to her at all. Her mother, God rest her soul, had difficulty with the challenges of being a parent and it was easier for her to give my mother up to orphanages when she couldn’t cope.

“That left an indelible mark on Mum when it came to trust issues and self-esteem and accepting love.”It also left her with a deep distrust of the Catholic Church as, adds Lisa, “there was a lot of cruelty, physical cruelty, in the orphanages she went to as a child. They were all Catholic orphanages.”

“And yet, for all the difficulties that Mum went through, her kindness really blew me away, because it wasn’t something that in many ways she was shown.”

Until, that was, she clapped eyes on Ray Wilkinson. Devastatingly handsome – “he was the spitting image of Frank Sinatra,” Lisa says now – Ray was playing double bass on stage at the Sydney Town Hall on a Saturday night.

The pair didn’t speak but “Mum was just smitten,” Lisa smiles. Unfortunately, she was also engaged to another man. Ray too was coupled up with a long-term girlfriend.

But fate intervened the following Monday morning when Ray turned up to interview for a job in the sales department at locomotive manufacturers, Clyde Engineering, where Beryl worked on the switchboard. The rest, says Lisa, is “beautiful history”.

Falling hard and fast for each other, both swiftly ended what were happy relationships in order to follow the path of true love. It was a move neither would regret, and it gave Beryl a life she’d never dreamt possible.

“My father was an absolute angel who loved her unconditionally and accepted all the challenges that came from my mother’s childhood. So there was, in many ways, a happy ending for Mum. But her childhood never left her.

“Like Beryl, Ray – who passed away in 1990 – is “never far away” in Lisa’s thoughts nor, indeed, in the home she shares with her husband Peter FitzSimons, 58.

“As we speak, Ray’s photo is on the mantelpiece looking down at me, sitting next to photos of my own loving parents,” the former Wallaby tells The Australian Women’s Weekly from the living room of their long-time abode on Sydney’s north shore.

“While Buddy, the kids’ adored floppy rag doll that Beryl bought in an op-shop for two dollars 25 years ago, sits atop a cupboard in the kitchen, gazing down on us all every day.”

Mother and daughter had become even closer in the wake of Ray’s passing. But when Lisa announced her plans to marry Peter, in a ceremony to take place just nine months after their first date, Beryl was sceptical.

“My mum was not a believer in Pete. It took many years,” Lisa laughs. “She thought we got married way too quickly. She always acknowledged Pete’s extraordinary generosity towards her but a few times she told him she was unconvinced we were right for each other.

“Pete, to his enormous credit, would never be challenged by it – he found it kind of amusing. And he said to me, ‘I know I’ll win her over one day.'”

“Beryl was a very hard marker when it came to sons-in-law,” Peter recounts of his dogged pursuit of approval. “She always wanted the very best for Lisa – perhaps especially because of her own very tough early experiences – and it took me some time to warm her up.

“But I think by the time of our 25th wedding anniversary she had really come to the conclusion that I was a stayer.

“What I will most remember Beryl for was being a completely devoted grandmother to our three children who she adored without reservation. And they her. They were the absolute joy of her life.”

While Beryl was just 60 when Ray passed away, at age 68, she never looked for love again.

Instead, she focused on her love for her grandchildren, moving in to help out when Jake was born in 1993 and staying on for the arrival of Louis and Billi in 1995 and 1997 respectively.

It was a godsend for Lisa and Peter who were both juggling busy careers along with parenthood. And it meant their children built special bonds with Beryl who, says Lisa, they “loved all the more” for knowing the hardships she’d experienced.

As we speak, ahead of the debut of the SBS series, Australia’s lockdown restrictions are beginning to ease. It means, Lisa says with relief, that all three of her kids can come home to watch it together with her and Peter and a “big box of tissues”.

Billi was the last to leave the family nest just three months ago, decamping to a share house with friends. Ordinarily, they are pretty much regular fixtures as they return to spend time with their parents, but COVID-19 had replaced that with frequent Zoom calls.

For Lisa, that has meant spending more time alone with Peter than ever before. And like many couples, that has thrown up its own challenges.

“Suddenly you have to take another look at your relationship and you go, ‘Oh, there’s a couple of raw edges here,'” Lisa admits. “And let’s just say that we have had to address some of those raw edges, which has been good for us.”

Lisa Wilkinson is managed exclusively by The Fordham Company.