Caltex Socceroos Head Coach Ange Postecoglou has resigned from his role with the national team.

He said while he appreciated the total support he had been given by FFA and the offer to discuss a contract extension beyond the World Cup, the time had come to move on.

“This has been a very tough decision for me,” he said. “It has been a privilege for me to coach my country’s national team, to lead them at the 2014 World Cup, to win the Asian Cup in 2015 and now to have qualified for the World Cup next year. I said we would do it and we have done it.

“All this however, has taken a toll on me both personally and professionally. I have invested all I can knowing how important a period it was for Australian football. It is with a heavy heart that I must now end the journey.

“To coach your own country is the greatest privilege but it also has enormous responsibility. I feel now is the right time to pass on that responsibility to someone who will have the energy it requires. I owe this to the FFA, the players and the fans. I look forward to watching the team take on the World next year. I have no doubt that road ahead will have many special moments and no one will be happier than me watching and cheering from afar,” concluded Postecoglou. 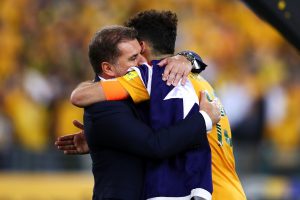 Steven Lowy said he and David Gallop were disappointed by the decision but respected Postecoglou’s reasons for leaving.

“Like all Socceroos fans, we hoped Ange would stay on to the World Cup and maybe beyond. He has done an outstanding job and has always had our total support,” Lowy said. “We wish him well for the future.”

David Gallop said it was hard to think of the World Cup without Postecoglou leading the team. “It’s going to take some getting used to, especially for the players and the national team staff,” he said. “But we always knew this day would come eventually and we have been doing succession planning over the past year.

“We will not rush this process. The Socceroos will not play again until March next year at the earliest so we have time to conduct a thorough process. With a guaranteed place in the World Cup, I am sure we will attract a strong field of candidates.”

Ange Postecoglou is exclusively managed by The Fordham Company.