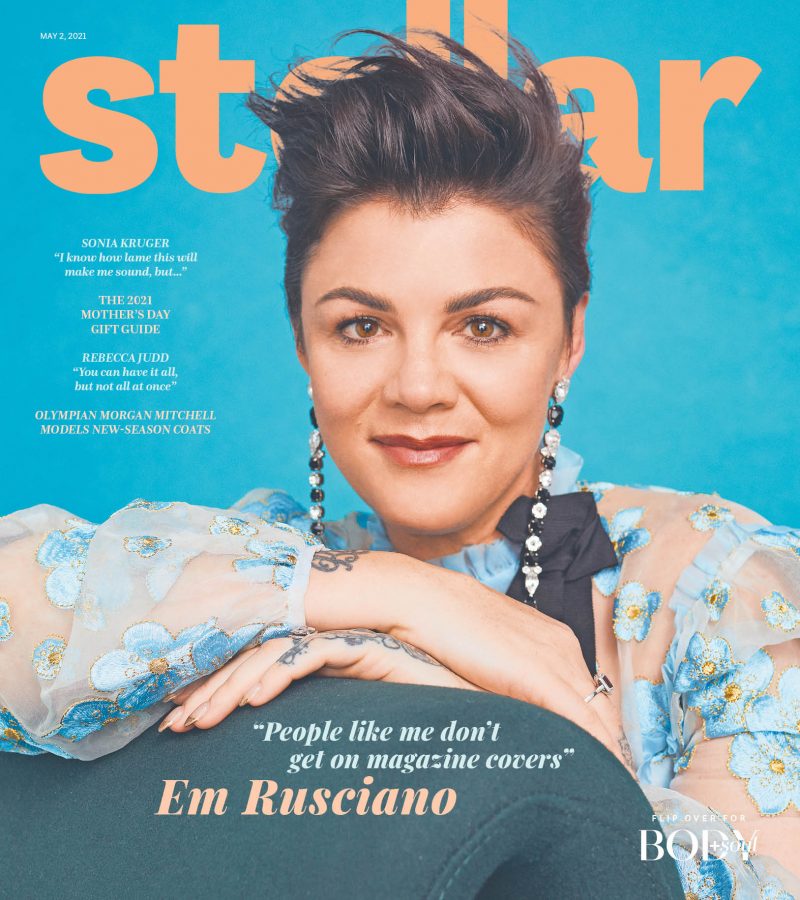 Em Rusciano doesn’t seem like the nervous type. After all, she’s had dancing vaginas prance around her as she’s sung live on stage in front of thousands of people. So it’s surprising to learn that she was battling some nerves ahead of her first cover shoot with Stellar. In fact, it’s the first cover shoot she’s ever done in her 17-year-career.

“I’m a comedian with short, brown hair and tattoos. Size 10. People like me don’t get on covers. And I’ve always been really self-conscious about photo shoots because, you know, I’m not a model. Photos worry me because I don’t want people to judge me on my inability to find where to put my hands.”

Career milestone aside, it’s been an extraordinary time for the Melbourne-based performer who blasted into our lounge rooms in 2004, wearing just one earring, courtesy of her stint on Australian Idol. A week before her Stellar shoot she was headlining sold-out shows at the Melbourne International Comedy Festival and Sidney Myer Music Bowl.

Just days before that, the 42-year-old mother of three was diagnosed with attention deficit hyperactivity disorder (ADHD). It’s not something she’s revealed publicly before.

“Normally I’m really open [about my life] because that’s how I process trauma,” she says.

“I talk about it out loud in the hope that it helps other people process things. But for once, I’m going to take my time and process it and not share, which, ironically I never do because I have ADHD,” she says, before joking, “But in a year’s time I’ll probably do ADHD: The Musical.”

While she’s not ready to go into details, the comedian says the ADHD diagnosis has already started challenging some of the ways she has long thought about herself.

“I was in a prison of my own making and I’ve put all these rules on myself: you’re messy, you’re disorganised, you’re a bad friend, you’re unreliable. I’ve had to work so hard to try to feel normal, and it was tiring. I’ve always been told that I’m too much, so allowing yourself to be yourself is liberating.”

he diagnosis also helps to explain why as a young girl who was a junior national champion hurdler and on track to compete at the Olympics, she suddenly decided to switch lanes and audition for a reality-television singing contest.

“I’ve pivoted so many times. I was this high-level athlete and then got pregnant at 21. I was a stay-at-home mother studying interior design, then Idol rolls into town and I go, ‘I’m going to be a singer, even though I’ve never really sung in public’.

Then someone offers me a job on breakfast radio, which I do, before trying stand-up comedy,” she says.

“But now I know why I have such risk-taking behaviours. All these decisions that led me to this career wouldn’t have happened if I had a ‘typical’ brain. So that’s a lot of things to unpack. All the things that have made my life hard have given me opportunities, too.”

It’s been well documented that Rusciano’s time in commercial radio was challenging, particularly the period when she co-hosted Sydney’s 2DayFM breakfast show with Grant Denyer and Ed Kavalee in 2018. At the time, there were reports of infighting and articles branding her “volcanic”. It’s a reputation that sits uncomfortably with Rusciano.

“When you come from that background of pursuing excellence at all costs, it’s hard to switch that off. But it’s also been pointed out to me that what people say about me – that I’m difficult, demanding, opinionated, not a team player – would be different if I was a man. It would be that I’m assertive or a leader,” she tells Stellar.

“I’ve never felt the burden of having to keep the peace, and it pisses people off. I’ve always been an individual athlete. A lone wolf. I’m good in teams when everyone is moving in the same direction. But I’m not that hard to work with. I’ve had the same team around me for a decade. It’s always the same people calling me difficult, put it that way.”

It was around that time that Rusciano suffered a miscarriage, losing her son Ray at 15 weeks. She recalls how her teenage daughters, Marchella (now 19) and Odette (now 14), could only watch on as their mother’s world fell apart.

“Around the time the baby died and all the breakfast-radio stuff was blowing up, the girls saw their mother at complete rock bottom,” she says now. “My girls have seen the ups and downs of my life and career. But they’ve also seen that I’m most happy when I’m in control, and that’s the biggest lesson I can give them: to back yourself; have every other side-hustle job that you can have until you find a place where you’re in control.”

Which is where Rusciano feels she is now. In 2019, she and her husband Scott Barrow welcomed their youngest child, son Elio, now 2. She then completed a national tour of her comedy/music show Rage + Rainbows and filmed a TV special for Network Ten.

In June, she’ll take to the stage again in a stripped back Live & Unleashed tour, with dates in Adelaide, Brisbane and Sydney, accompanied by her father Vincie on guitar and daughter Marchella on vocals.

During COVID, Rusciano started her Emsolation podcast with her best friend Michael Lucas, talking politics and pop culture with her trademark honesty and humour.

And with more than 300,000 downloads a month and a passionate audience – “all women, gays and lesbians; basically everyone but straight white men,” she jokes – it caught the attention of international audio-streaming giant Spotify, which has signed Emsolation as one of its first Australian-exclusive podcasts.

“I’ve come full circle on my broadcasting because I’ve found one of the biggest companies in the world that loves me for me and doesn’t want me to change a thing,” Rusciano says now.

“I’ve spent most of my broadcasting career being told I was wrong. I was being told how to be a relatable woman from 50-year-old blokes. Now, it’s super validating to be told, ‘Keep being you. Be more. Be bigger.’ At 42, I’ve finally been able to make what I want, for the people I want, and have the backing of a huge company to make it.”

A rumoured gig on the Seven Network’s reboot of Australian Idol next year would also bring her career full circle. “I’d love to be a part of that show,” she says.

“The spirit of Idol is more wholesome. It’s not about the judges, it’s about the contestants. They’re not professional musos, but they have something maybe the rest of the country could benefit from.”

Even though Marchella has her mother’s chops and performs with her on stage, she’s not allowed to audition. “I wouldn’t put her through reality TV. I didn’t love my experience. I loved the career it gave me, [but] at the time I thought I was going to die,” Rusciano tells Stellar.

“I was a 25-year-old mother of one, with no TV experience, no music experience, no entertainment experience and put on a show watched by two million people a week. It was my worst nightmare. I cried every night. I became the girl with the one earring – my homage to Madonna – who cried a lot.”

Whatever happens, Rusciano says she’s going to continue to cultivate her passionate community and do anything she can to sprinkle some glitter into people’s lives.

“I know what it’s like to be lying in the foetal position at 2am, crying into a towel because I don’t know what to do next,” she says. “And if I can make art that helps one other person not do that, then I’m doing my job.”

Em Rusciano is managed exclusively by The Fordham Company.