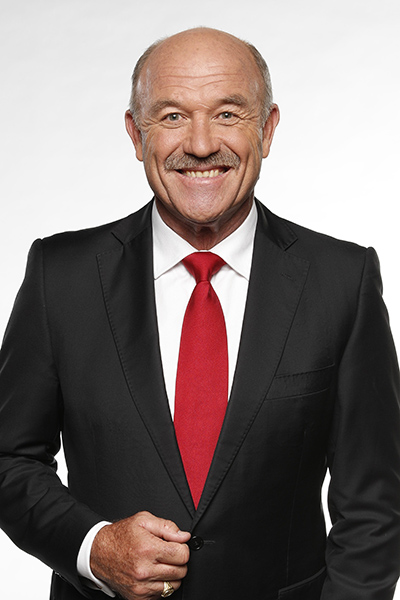 Universally recognised as 'The King' for his superlative displays for Queensland and Australia. Rugby league ‘Immortal’ and currently a commentator for the Nine Network. Brand Ambassador and all round Legend of Australian Sport.

Wally Lewis enjoys the ultimate rating in rugby league – one of the greatest players of all time.

Universally recognised as ‘The King’ for his superlative displays for Queensland and Australia, Lewis has etched his name in rugby league folklore with his selection as an Immortal, induction in the Australian Sporting Hall of Fame and inclusion in the Australian Kangaroos Team of the Century as five-eighth.

But the accolades don’t finish there.

Wally Lewis played 33 Tests for the Australian Kangaroos between 1981 and 1991 and was captain from 1984 onwards.

In the grand theatre of State of Origin, he played 31 times for Queensland, captaining them in all but one match.

Such a dominant figure was he in Origin, he won eight man-of-the-match awards – a record still standing – twice as many as any other player in State of Origin history.

Lewis has the unique honour of being a member of three undefeated Australian touring teams to Britain.

The first was as a member of the 1977 Australian Schoolboys rugby union team, where his team-mates included the Ella brothers (Mark, Glen and Garry), future dual international Michael O’Connor and future Wallabies Michael Hawker, Chris Roche and Tony Melrose.

Then, after settling back in to rugby league, he toured with the Australian Kangaroos in 1982 and 1986, the latter as captain.

Wally Lewis, who was honoured as a Member of the Order of Australia (AM) in 1987 for his service to rugby league football, these days is one of the Nine Network’s leading rugby league commentators and news presenters. He is also a much in demand corporate speaker and MC.