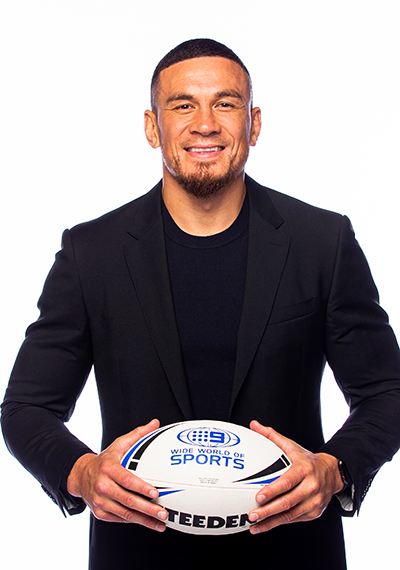 A two-time rugby union World Cup-winner, a double Grand Final rugby league champion and an undefeated heavyweight boxer, Sonny Bill Williams is one of the most recognised and successful athletes on the planet.

Many famous people are known by one name, but to be recognised by just three initials - SBW - puts Sonny Bill Williams in a rarefied stratosphere. Such is the far-reaching talent and wide-ranging gifts of this one man, that he confounds the proverb "jack of all trades' because he is a master of everything that he has applied himself to. But the on-field and in-the-ring, achievements are only a part of the story. Sonny Bill Williams is much decorated as an athlete in rugby league, rugby union and boxing but he parallels these sporting accolades with actions in his broader life, matching his on-field successes with his off-field accomplishments.

From his 2004 rugby league debut with the Canterbury-Bankstown Bulldogs through to calling time on his football playing this year, Sonny Bill has had a glittering career across three decades and four continents, including 123 NRL games and 58 rugby union Tests for the All Blacks. His athleticism has taken him from the modest inner-city Auckland suburb of Mount Albert, where he grew up, to the highest sporting heights in his field, at Twickenham, Eden Park and Sydney's Olympic Stadium.

After four seasons and a Grand Final win with the Bulldogs, Sonny Bill made his high-profile switch from rugby league to union in 2008, playing with French side Toulon before moving back to New Zealand and slotting into the All-Black squad with ease, winning the World Cup on home soil in 2011 and then again in England in 2015.

Somewhere in the middle of his union success, SBW returned to Rugby League and to the Sydney Roosters for two seasons, during which he helped his team to Grand Final glory over in 2013.

In June 2016, Sonny Bill recommitted to his future with New Zealand Rugby by signing a three-year contract to play for Super Rugby’s Auckland Blues. The experienced centre helped the Blues claim a victory over the British and Irish Lions in July 2017 and went on to feature in the Test series for the All Blacks against the same touring team from the northern hemisphere.

After playing rugby league for the Toronto Wolfpack, he had another short stint with the Sydney Roosters before confirming his retirement from both rugby codes to focus on his boxing career in March 2021.

Driven by his fierce moral compass, Sonny Bill Williams knows the value of everything that matters, to those who matter most. He is a dedicated family man, devoted to his faith, committed to his teammates, respecting of his fans. The first Muslim to play for the All Blacks, Sonny Bill has thoughtfully and authentically used his standing and platform in the sporting world to speak out on political and cultural issues that confront the world at large. Whether in his capacity as a UNICEF Ambassador visiting Syrian refugee children in Lebanon or giving away his Rugby Union World Cup winning medal to 14-year-old, New Zealand fan, minutes after receiving it, SBW has that rarest of abilities to touch and inspire the lofty and the lowly.

Whilst remaining committed to boxing professionally, Sonny Bill has joined the Nine Network and Stan Sport commentary team, covering the National Rugby League, Super Rugby AU and Aotearoa, along with the international Test series later in the year.

This love of family and faith, combined with Sonny Bill's skill and performance throughout his unparalleled sporting career, his ability to unite a team under pressure, his grace in owning his mistakes, the challenges of leaving home as a young man and dealing with a negative culture and the temptations that followed, and his courage in speaking out for the vulnerable and calling out injustice are all aspects of the inspiring athlete and man that he is.

The Fordham Company is the exclusive commercial agency of Sonny Bill Williams in conjunction with his agent Khoder Nasser.