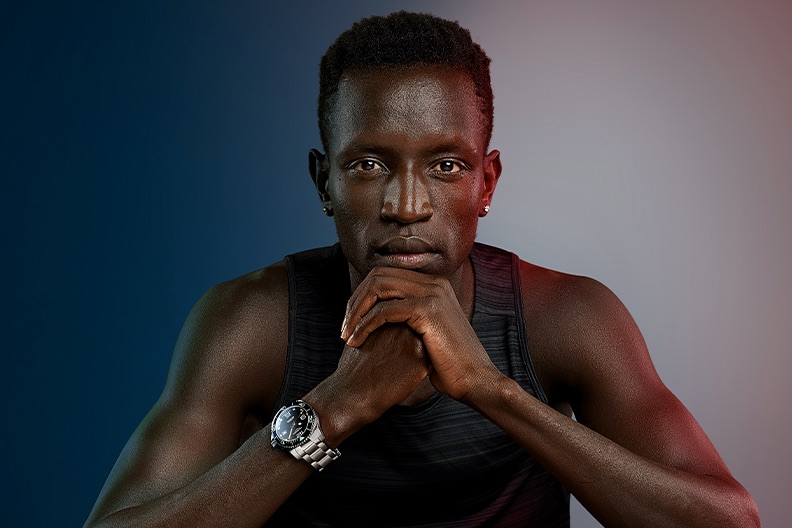 Longines is excited to announce that Peter Bol, the brilliant Australian middle-distance runner, has joined its 2022 Commonwealth Games Team. A specialist in 800-metre races, Peter already holds the national record in this discipline and distinguished himself on the tracks in Rio and Tokyo. But his ambitions go far beyond what he has already accomplished. We’re pleased to introduce you to an extraordinary competitor.

Get to know the person instead of the assumptions”

Peter Bol is one of those rare sporting talents who has lit a fire that burns beyond the track, field or arena of his achievements. His successes have fired the imaginations of his fellow Australians, who look forward to seeing what new barriers he breaks and what milestones he achieves next.

Peter is articulate about what it means to have moved to a country and to be representing it on the world’s most prestigious sporting stages. He says, “I don’t think people should be seen as a refugee or a migrant or something like that . . . get to know the person instead of the assumptions.”

Peter Bol has been defying stereotypes, overcoming obstacles and breaking records for years, a trend that continued at the Diamond League event in Paris in June, where he set a new personal best time of 1:44 in the 800-metre run, breaking his own Australian National Record. And the best is yet to come!

Peter Bol has a bold ambition: he aims to become the greatest 800-metre runner in the world. And no one who has seen the new member of the Longines 2022 Commonwealth Games Team doubts that he can achieve that goal. Peter’s story is compelling. As a child, he relocated with his family from Sudan to Australia. At school in Perth, he was a standout basketball player but he was also required to participate in school athletics. He regularly won his races and was ultimately convinced by his teachers to swap his basketball kit for track shoes. He won the junior men’s 800-metre event in 2015 and never looked back. Peter looks forward to adding to his legacy – and continuing his relentless pursuit of his goal – in Birmingham in August.

Peter Bol: “Incredible to be a part of the Longines team”

When it was announced that Peter was joining the Longines 2022 Commonwealth Games Team, he said, “It is incredible to be a part of the Longines team, with such a rich history of fine watchmaking and timekeeping. I am very excited for what this partnership holds. Its collaborations with outstanding sporting talents like Peter Bol reflect Longines’ commitment to top-level international sport and to brilliant athletes. As the Official Partner and Official Timekeeper of the Birmingham 2022 Commonwealth Games, Longines will encourage them to create their own moments of sporting history.