LISA WILKINSON: “THE MOMENT I KNEW IT WAS ALL WORTH IT” 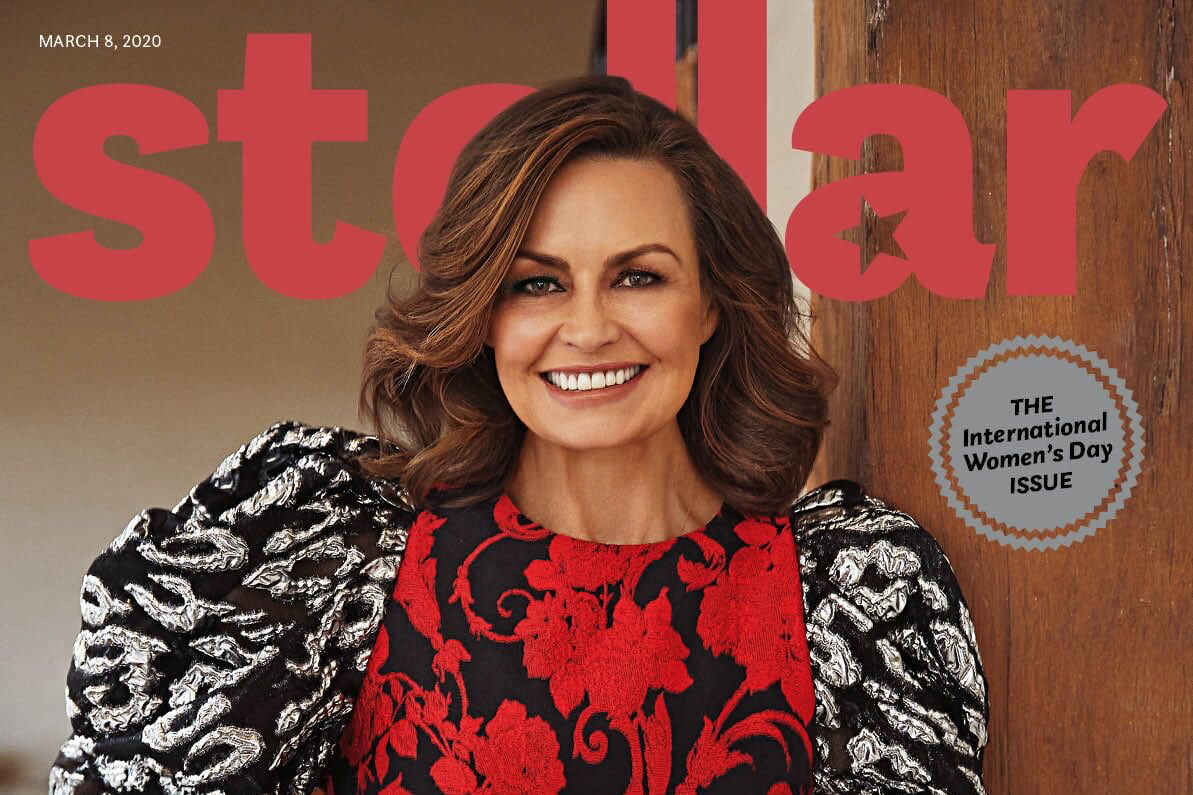 Lisa Wilkinson is posing in a doorway wearing a voluminous snake-print skirt and following the photographer’s instructions with the practised ease of someone who, if not a model, has done this plenty of times before.

“Does it work or not?” she enquires, picking her way past lights and the assembled crew to check her image on a laptop. She’s not sure about having her hands on either side of the belt cinching in her waist, and suggests putting one in her pocket.

Then she catches herself and erupts into laughter. “Every cell in my body is saying, ‘Pull back, this is not your shoot,’” she says, although as Stellar’s editor-in-chief Sarrah Le Marquand points out, Wilkinson is the magazine’s guest editor this week, so technically it is.

It’s been more than 20 years since Wilkinson made the switch from magazines to television, but as she smiles down the barrel of the camera and considers what tone she wants to convey, it’s obvious the print trade isstill very much in her blood.

So much so that she didn’t have to think twice when asked to edit Stellar’s International Women’s Day issue.

“Stellar feels exactly like the magazine that I was trying to create in the ’80s and ’90s with Cleo,” she says. “It’s about good journalism, great profile pieces, fashion and features that inspire, lives you’re fascinated by – all wrapped up in that one regular bundle of pages.

“Sarrah has done the most incredible job of every week bringing the best of what magazines for women can offer. You feel better for the experience, not worse. It is positive.”

“Positive” might be the most apposite word for Wilkinson herself as she celebrates more than four decades as a trailblazer in the media industry.

While she triggered a publicity storm by abruptly exiting the Today show two-and-a-half years ago to take up a role on The Project, the woman on set with Stellartoday has the energy and optimism borne not only of wisdom but a solid night’s sleep. As she says, after a decade of sleep deprivation, she is no longer permanently exhausted.

“I’ve got these new reserves of energy and I feel challenged and invigorated,” she says, laughing. “I love it when the alarm goes off and I see the number seven at the front. I wouldn’t change any of it.”

As a veteran of both producing and being the subject of magazine covers, Wilkinson would appreciate that her recent milestone birthday last December (she turned 60) would traditionally have been the main focus of any magazine’s cover line.

Even turning 40 or 50 was regarded as a breathless achievement for women – often with an exclamation mark to drive home the point – while men largely escaped such pointless benchmarking.

“If you go back 30 or 40 years, women on television were often seen as window dressing and the authority came from the men,” she says. “But audiences have insisted on that changing. Now when you look around at the news and current affairs on TV, most of the major hosting positions are held by women.”

She cites Tracy Grimshaw, Leigh Sales, Sandra Sully, Jenny Brockie, Liz Hayes, Chris Bath, Tara Brown, Sarah Ferguson and her colleague on The Project, Carrie Bickmore, as examples of the trend and commends audiences for allowing them to “age and grow in experience”.

As she says, television executives are driven by audiences and “only dumb executives would run against that tide”.

It is this terrain that fuelled Wilkinson’s excoriating examination of sexism in the media when she delivered the Andrew Olle Media Lecture in 2013. Seven years on, as she celebrates International Women’s Day, she senses some change and believes that the hard-won wisdom of women is more valued now than ever.

“I’m thrilled that at the age I now am, I’ve never felt more valued as an employee, more engaged with what I do and never felt more excited about what’s ahead because, clearly, I’m in my second half now.”

She believes maturity brings the confidence to live a life that’s the most honest reflection of who and what you are.

“Sometimes you have to take a few steps back to move forward. And that’s OK. The trick is, when you find yourself in a negative place, to re-evaluate and figure out what you need to do to get back into that positive place. To find that, you have to remember that life, all of it, is a big work in progress.”

It’s also, as she points out, finite. “I’m keenly aware that I’m only weeks away from being the same age my mother was when my dad passed away.”

Likewise, Wilkinson was only weeks into her new role on The Project when her mum Beryl died, but it brought home to her the opportunities she’s enjoyed that were denied women of previous generations.

“Mum had a tough childhood, but married a wonderful man and was a committed mum and housewife. It was safer for her to view life through my dad’s eyes – particularly with his community work and passion for rugby. So when Dad died suddenly, I think she really struggled. And she was always worried for me whenever I made big life choices.”

Including, it seems, when it came to Wilkinson’s choice of husband. When the young editor married former Wallaby Peter FitzSimons in 1992, her mother was adamant that it wouldn’t last. “You’re too different,” she insisted.

“She found Pete very upfront. One of the qualities I love about Pete is he totally wears his heart on his sleeve and that was often hard for my mother to take in. But he was always the first to give her a big hug when he felt she needed it, and in the end he wore her down.”

No-one can be in any doubt that the power couple’s relationship has been a success, with the pair marking their 25th anniversary in 2017 by marrying again.

But as she pointed out in an Instagram post on Valentine’s Day last month, young love can often get lost in the reality of work, kids, mortgages, exhaustion, misunderstandings, wet towels left on the floor and empty toilet-roll holders.

Now through the other side with their children, Jake, Louis and Billi, all aged in their 20s, she urges other couples to “hold on” through “the crazy, tough middle bit”.

As she tells Stellar, she was amazed by the response from her followers. “I was scrolling through Instagram on Valentine’s Day and I thought everyone’s painting this picture of ‘aren’t relationships easy’, and I thought, ‘Hold on a second, no they’re not.’ We don’t acknowledge that and remind people that longevity in marriage and relationships takes work. Nobody talks about what those tough middle years are like, and that’s often when relationships fall apart.”

Although she and FitzSimons are soon to become empty-nesters with a third child about to follow the other two and move out, Wilkinson has no intention of suddenly upping sticks and becoming a grey nomad.

Rather, she’s enjoying augmenting her work on The Project with writing her autobiography, gardening, speaking engagements, photography and charity work, including a recent bushfire relief fundraiser.

She’s also an enthusiastic user of Instagram, where she’s built an audience of 339,000 followers, after being encouraged to establish a presence on social media by a former boss. And now she’s got some energy and free mornings, she is also following in her husband’s well-documented lighter footsteps by embracing going to the gym.

But mostly, she relishes having time, particularly with her children. “It was about six months after I made the move, and Pete, the kids and I were sitting around having a mid-week barbecue that ended up going well into the night. At about 11pm, we were all still chatting when Jake, our eldest, turned to me and said, ‘Mum, it’s so great that you can do this now – stay up late and not be frantically watching the clock so you can get to bed. I feel like we’ve finally got you back.’

“I was suddenly reminded of the price your kids pay when your job can be all-consuming. That’s when I really knew it had all been worth it.”

Rumours still abound around her reasoning for defecting from Nine, but Wilkinson prefers to focus on the breadth and scope of the work she’s enjoying in her new role, including interviews with the likes of Kim Kardashian, Serena Williams, David Beckham and New Zealand Prime Minister Jacinda Ardern.

She’s also relishing getting out on the road and telling the extraordinary stories that happen to ordinary people. “I feel very privileged that these people allow me into their lives,” she says. “It’s never lost on me that I dip into these people’s lives as they show me the raw underbelly of who they are while the cameras roll. That’s why I often check in to see how they’re doing, because I don’t want them to feel like I’m cherrypicking, then moving on.”

As to the people who were in her life during her Today years, Wilkinson remains “extremely close” to former colleagues Ben Fordham and Sylvia Jeffreys (with whom she recently enjoyed a four-hour lunch just days before the former Today newsreader gave birth to baby Oscar).

Yet doubtless all will feature in her upcoming autobiography. She has yet to settle on a title for her memoir, but hopes it will capture the person she’s always endeavoured to be: a woman with a “glass half-full attitude” and the firm belief that there is always a tap somewhere nearby.

Lisa Wilkinson is exclusively managed by The Fordham Company.