By Jessica Halloran, The Sunday Telegraph

TENNIS champion Jelena Dokic has revealed the incredible battle she is fighting to get back to health after her weight doubled to 120kg due to a thyroid illness.

In an exclusive interview the former world number four said the mental struggle has been tougher than the physical aspect of losing weight.

Dokic, who was renowned for her exceptional fight on the court, said she has worked hard to lose 30kg over the last year but has another 30kg to go before she reaches her goal weight.

“I was exactly double my weight and it has been a really challenging journey trying to lose it,” Dokic said. “I am halfway now, it’s a work in progress and I hope to drop another 30kg over the next six months.”

“It’s not just about losing the kilos it’s also about gaining confidence and self-esteem as well.”

After her retirement from professional tennis in 2013 she developed hyperthyroidism, a condition that not only drastically increased weight but made her feel fatigued and weak, hindering her efforts to get fitter.

“I put at least half of the weight on because of my thyroid, I just ballooned and couldn’t do anything about it for almost 12 months,” Dokic says.

“Since I started committing to weight loss last year it has been more a mental battle losing weight because I am also used to working very hard with tennis but I couldn’t do a lot of physical work because of my thyroid condition.

“That condition made it incredibly difficult to lose the weight. You may think in your head you want to lose 10, 15kg in a month but it doesn’t go like that.

“For me I have had to learn patience. At times you might lose four or five kilograms very quickly but then you might not. You only drop one or two kilograms.”

Dokic admitted she faltered a few times but each time has managed to refocus by implementing a diet and exercise plan.

“I wanted to give up sometimes but it was about keeping consistent and positive,” Dokic said. “You have to think about your goals. You might have weeks and weeks where you haven’t made progress but then it happens, you lose weight again. You need to be patient.

“You have to stay more mentally strong than physically. Trying to stick with a diet is a bigger challenge than any of the physical stuff.”

Dokic said she is hitting tennis balls for up to two hours most days as well as running and walking to lose weight. She is considering a comeback to tennis.

“I couldn’t do what I wanted to do, I couldn’t run, play tennis, jumps, run stairs, because of my thyroid condition I was really struggling,” Dokic said.

“So I had to just walk at the beginning. I would walk up hills slowly. That took a little bit of time. I didn’t do intense physical activity for a while. I only could start running after I lost the first 15kg. Then I slowly started running.”

Diet-wise she ditched “sugary drinks and snacks” and introduced green tea with ginger and three litres of water a day.

“Mainly the first thing I did was be careful with all the drinks, sweets and sugar,” she said. “That was the first thing I completely tried to take out. I really tried to limit sugar. It was not so much the carbohydrates at the start, it was the sugar that I cut out. For me that is what I react to the best.

“I also really started to take notice of food labels. I started looking at the fat content, good fats, bad content, protein content, carb content and especially the sugar. I really started to educate myself about nutrition. I also started to weigh food to control the portions.

“Fish and vegetables have literally become my staple meal.”

Dokic signed up as a Lady Shake ambassador earlier this year and she said that has played a key part in helping her shed weight.

“Being in sport I obviously knew a lot about supplements, in playing days we used protein shakes for recovery. This was interesting because it’s a meal replacement, it’s got absolutely everything you need without a huge amount of calories and only one gram of sugar, which is very rare,” Dokic said. 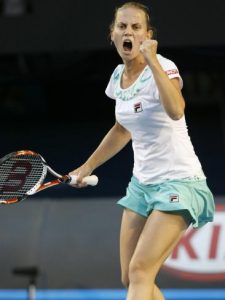 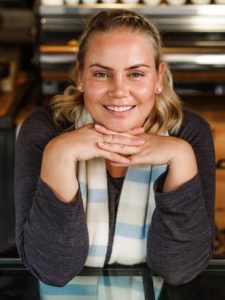 “I do like to have those meals in liquid form, the other thing I like about it is it is very quick and easy to prepare. You can mix it up with some berries and you have a great meal. It keeps you full. I like the taste of it.”

She has a Lady Shake for one meal a day, sometimes twice, as well as eating protein and vegetables for other meals.

Adam MacDougall, who owns the Man Shake and Lady Shake, said he had been impressed by Dokic’s “positive” attitude.

“She is an inspiration,” said MacDougall.

“The fact she is focused on her health and being her best self first is an inspiration. There is a lot of pressure on women in general around weight, let alone for a woman in the public eye.”

Jelena Dokic is exclusively managed by The Fordham Company.